As you are already aware, the Kewaunee County Board is attempting to pass a 1/2% Sales Tax in the county without having the public weighing in on the matter. At the August 16th board meeting a motion was made from the floor to refer the approval of a sales tax to a referendum, thus allowing the taxpayers of Kewaunee County the ability to weigh in on the issue.  The vote ended with five members of the board in favor of sending the issue to referendum with 14 of the board members voting against the motion.  Here is the way the vote ended. Those supervisors who believe the taxpayers should have a say:Chris Rasmussen, Dennis Cravillion, Doug Doell, Scott Jahnke and Kaye ShillinThose supervisors who believe they have the right to impose this tax without the taxpayers having a  voice:Lee Luft, Bob Weidner, Pat Benes, Virginia Haske, Larry Kirchman, John Mastalir, Gerald Paape, John Pagel, Tom Romdenne, Ron Paider, Linda Sinkula, Linda Teske, Donna Thomas and Charles Wagner  (There are 20 board members, however Mary Dobbins was absent, not present for the vote)Those supervisors that voted to bypass the taxpayers will tell you there are going to be meetings set up for taxpayer input, the first of those meetings will be on August 29th at 6:30 PM.  I have embedded the announcement of that meeting here, and attached the official notice as a PDF......Note, although this upcoming meeting allegedly set to solicit input from the taxpayers as to whether or not to go to referendum, there is no mention of referendum in the official release. 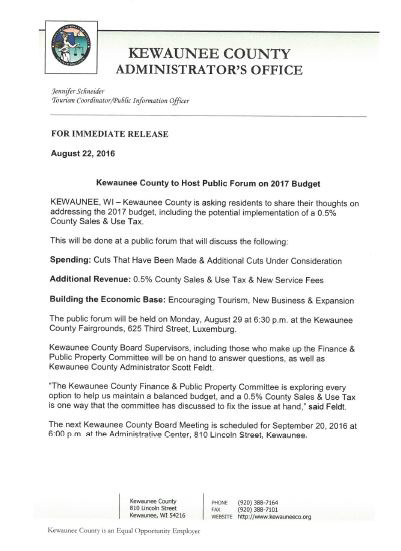 According to a phone conversation I had with the Administrator Scott Feldt on Aug 23rd, Mr. Weidner, the County Board Chairman had been informed by Mr. Feldt that the County would not be in financial difficulty for FY 2017 without the 1/2% sales tax.  That tidbit of information was not revealed to the board by Chairman Weidner.  Why not?  Your guess is as good as mine.  So the question should then be why the rush to impose yet another tax on the taxpayers of the county?
Attend the 8/29 Monday 6:30 PM meeting in Luxemburg and let your voice be heard in this matter!

Chris Rasmussen is a friend and is working hard to try to hold the spending line in Kewaunee County.  He has asked for my assistance in distributing the letter that appears below.  Mr. Luft, Chairman of the Finance Committee is hell-bent on increasing taxes and fees.

You must get involved now, or it may be too late.  Attend the Aug 9th meeting to get the details and let your elected Supervisor know of your position on these taxes and fees.

On Tuesday, Aug 9rd, 6:30 PM at NorthBrook Country Club, I am hosting a meeting get your feedback on a variety of new taxes and fees currently being considered by the Finance Committee and ultimately Kewaunee County Board.

I serve on the Finance Committee and have learned over the last few months that Kewaunee County is facing significant budget deficits this year and the foreseeable future.  Finance Committee Chairman Lee Luft and the other Finance Committee would like to address this issue by creating new taxes and fees.  In fact, they voted 4-1 last night to recommend a county-wide sales tax to the full board – specifically denying input from the public by intentionally refusing a referendum.  Furthermore, they have not formally proposed even one spending reduction on almost $29M of spending before passing this tax out of committee!

I fundamentally disagree with this approach, but my appeals have fallen on deaf ears.  A sales tax should be the very last resort – but they’re not even giving spending reductions a chance.  Without your help, they will pass their new sales tax without going to referendum, and along with it a whole host of new fees!  I NEED YOUR HELP AND VOICE!!

Kewaunee County Financial Forecast
The financial issues facing the county are relatively complex and span multiple decades and countless poor decisions by our elected officials.  Prior to the May County Board meeting, the County Administrator at the direction of Mr. Luft presented a five year Kewaunee County Financial Forecast showing a 2017 budget deficit of $1.0M, growing each year of the forecast culminating in 2021 with a $3.5M budget deficit.

During that five-year span, they forecast spending to increase on average by almost $800K annually.  $800K per year!  While over the same span, property tax and other income is only forecasted to only grow by $210K per year.  Left untouched, the average spending growth outpaces income growth by almost $600K per year!  THIS IS NOT A REVENUE PROBLEM – IT IS A SPENDING PROBLEM!

Their original forecast included 15% year over year health insurance increases, a clear overstatement of expenses in order to “sell” their wish-list of taxes and fees.  After facing continuous scrutiny by me in that and follow up meetings, Mr. Luft and Mr. Feldt revised their forecasts, backing off of the 15% to 10% and eventually 5% year to year health insurance increases.  Although slightly more palatable, these versions still forecast average annual spending increases to outpace income growth in the county by $400K and $250K, respectively.  There is no tax and/or fee that will continue to grow by $600K, $400K, or $250K annually.

Their own projections show the result is a 3-year Band-Aid that would leave us further in the hole!  Not including the Property Tax increase because they know it would face certain defeat at the polls, but, if they were to impose their new wheel tax of $360K, half percent sales tax of $1.3M, and increased/new fees of $350K, they still generate huge budget shortfalls again by 2020 ($600K), and 2021 ($1.4M).

That’s right – according to their forecast they would raise taxes and fees by $2,010,000 and still be in the hole by 2020.  THIS IS NOT A REVENUE PROBLEM – IT IS A SPENDING PROBLEM!
When I asked the County Administrator if he thought this was a Band-Aid, he told me that it would buy some time and that our “wake up call” would be in three years.  I suggest to you that the wakeup call has been ringing for some time now and we’ve been hitting the snooze button for far too many years.
What Are Our Options
Those on the Finance Committee keep saying the answer has to come from both sides – some spending reductions and some “revenue enhancements.”  And although this sounds great, but the fact of the matter is that they have not considered a single spending reduction.  I have brought forth a dozen ideas or more of areas to reduce, but they are unwilling to listen.  Their forecast is a reflection of what they will do with more tax revenues – not one area is reduced.  Not a single one.


Chris Rasmussen
County Board Supervisor, District 5, Kewaunee, WI
Posted by Ron Heuer at 10:51 AM No comments: