I have been, and continue to be a staunch anti-wind turbine person.  We fought them off in our neighborhood about 8 years ago and now the developers (now out of Western Canada) have cancelled their leases in Kewaunee County and are moving to Manitowoc County.  They are planning on installing 80 - 3.5 Megawatt Wind Turbines along Hwy 42 from County Trunk B to just North of Two Rivers.

Well, at the time we were waging the war with a local developer (who later sold to the Canadians), we sited all the horrible truths about the worthless wind option to include; billions of taxpayer dollars to subsidize this industry.  For without subsidy they don't exist, it's not a viable business.

There were many issues of complaint concerning the idea of placing wind turbines here, but one of the biggest issues was the idea of decommissioning.  Who's going to be stuck with the bill on this? Were adequate monetary accruals going to be made by the company to ensure the neighborhood wouldn't be stuck with taking those worthless machines down later?  Although the company struggled to provide answers on that issue, they never adequately provided any security that made sense.

Quite honestly, we had no idea of the total costs of decommissioning nor the issues surrounding it.
Here is a good AP article on an issue we never even addressed at the time because we didn't understand or foresee it. 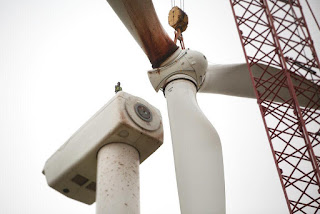 In this Nov. 5, 2019, photo, a worker monitors a hub replacement from atop a wind turbine in Walnut, Iowa. MidAmerican Energy's wind farm in Walnut, Iowa, has started repowering turbines, some of which have had their original blades since 2004. Blades can weigh up to 11,500 pounds.


"Unless there's a better solution, they are going to get landfilled," Peters said. "But if you look at the total economic and environmental costs of reprocessing that blade, landfilling may be the best solution."
Posted by Ron Heuer at 4:38 AM No comments: