As a kid who was brought up on a farm in the 50's and 60's, we had to entertain ourselves a lot.  Well, singing was a family tradition. Both my parents were good singers and they sang with us seven children a lot.  We had several quartets and trios through those years.

One of my favorite places to sing was in the empty silo in the spring where my voice would echo and reverb off the silo walls.  So, when I was 20 years old I purchased my first guitar in Lima Peru while I was visiting my brother who was stationed there with the U.S. Army.  He was flying helicopters and ferrying a bunch of surveyors all over the place as they were mapping the country.

Anyway, I nearly drove people crazy as I learned how to play the guitar all by my self, never had a lesson, read a bit about it and with the advent of the internet was able to pick up more songs and ideas.

Throughout the years at family gatherings Marty, my oldest brother and I would pull out the guitars and provide entertainment or lead in various sing-alongs. I never was that good at harmonizing, but Marty was.  So it wasn't long before we'd be singing one song after another in harmony. We started as two guitars and two singers doing birthday parties, special events and singing at nursing homes.

Both Marty and I were Vietnam Vets and both of us played guitar and entertained ourselves in Vietnam with our guitars.  Marty belonged to a group that wrote songs about Vietnam and then ended up playing those songs at get-togethers in Vietnam.  So, in May 2011 we put together an ad hoc group and sang those songs at the LZLambeau event that was held in Green Bay.  We had our brother Wayne join us for this event, as Wayne also played guitar and was arguably the best male voice in our family.

In about 2012, brother Marty and I decided to fulfill an item on our bucket list, that being to form a group and do some public singing.  We had come in touch with the Thompson brothers who were both accomplished musicians so we pulled them into our group and I contacted an old high school friend who played the harmonica, and thus we had our band!  So not being the most creative group in the world we called ourselves the "HEUER BROTHERS".

So the "Heuer Brothers" band had two guitar players, a bass fiddle player, a mandolin player and a harmonica guy. We started doing gigs and taking bookings.  After year two what was started as an endeavor to have fun started turning into a job.  So, we made the decision to disband the band!

Before we disbanded, we recorded a number of our favorite songs and produced a CD.  Below, by clicking on the individual recordings you can get a sense of the type of music we played.  We met our bucket list goal and while doing it had a few laughs and good times! 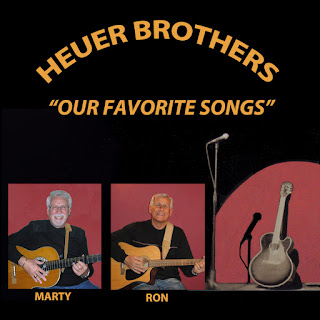 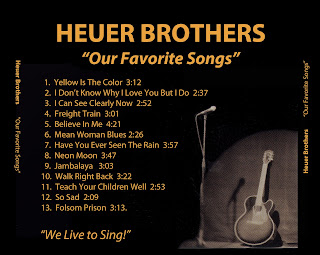 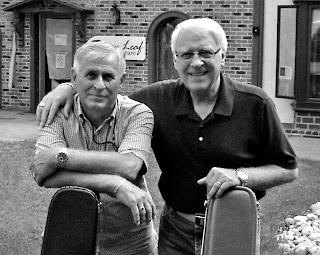 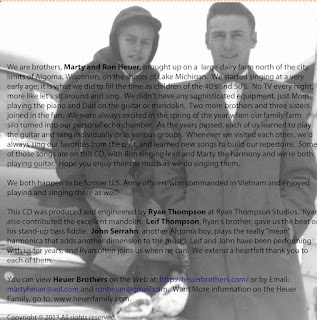 Yellow is the Color

I Don't Know Why I Love You But I Do

I Can See Clearly Now

Have You Ever Seen The Rain