Following is an informational document I prepared and emailed to the Finance Committee members who are scheduled to take up this issue during their November 2, 8:00 AM meeting.  I also sent it to the entire County Board.

This is in regards to a ridiculous idea that would take $1 million dollars that Kewaunee County received from Dominion and use it to finance building POP (point of presence) towers to facilitate internet access in our County.

This a complicated issue and something the County should leave to private enterprise.  To accentuate how ludicrous this idea is, I took this statement from the Personnel, Advisory and Legislative Committee minutes of their October 2, 2018 minutes.  Mr. Luft is quoted as saying "the allocation of the funds ($1M) sends a message to the community that we are listening to their concerns".

REALLY?  WE HAVE TO SEND A MESSAGE THAT COSTS TAXPAYERS A COOL MILLION TO SHOW WE ARE LISTENING TO THEIR CONCERNS?  Tell me this is not a pitiful statement.

So this is the information I forwarded directly to the board members.  This whole idea to me sounds like an Obama phone scam for the taxpayers.  Could this $1M be better spent reducing our taxes in the County or some improvements that might benefit all citizens of our County?  Guess what, soon our Sheriff will be demanding the new jail be built.  Would you guess that will cost more than $1 M?


Information for Kewaunee County Board Members on Internet Access in Kewaunee County
Prepared by Ron Heuer 10/26/2018
As both a former board member and Chairman of the Kewaunee County Board, I continue to take interest in the activities of the current board and the actions of the board in general.  A current discussion underway concerning spending County dollars on a broadband project is of great concern.  Kewaunee County, in no way, should spend a single taxpayer dollar including Dominion monies to support a broadband company tower build project.
Why?  Because today private enterprise already provides internet service to those who wish to pay for it.  Taxpayers should not be subsidizing internet service for local business or for individuals - read on.
The Issue at Hand
The Administrator Mr. Feld, very likely with urging from certain uninformed board members, decided to allocate the $1M the County received from the Dominion settlement to a County broadband internet project.  This decision, according to the Administrator, was made in consideration of the economic development for the county.
At the October 2, Personnel, Advisory, and Legislative committee meeting a motion was passed to recommend to the Finance Committee to remove the $1M line from the Economic Development Fund in the budget and for this project to be taken up as a stand-alone item.
A decision of this magnitude is not to be made by the Administrator.  This is a Finance Committee and full Board decision.  This decision considering economic development was largely based upon 4-year-old survey data from KCEDC (a year in the internet/cyber world is equivalent to 10 years in most other business tasks and services as technological innovation is moving at breakneck speed).  Never should the government at any level get involved in any process the private sector can fulfill.
Further there is broadband service available to every county residence today if they are willing to pay for it.  There is no need for any government intrusion in this matter.
First, let us understand and agree on - What is Broadband?
The word (Broadband) has been bantered about by the Administrator and other county board members.  So, what is broadband?  That depends on who is selling you internet service.  Locally, many companies hype broadband service at 4MBPS download, but is that really broadband?  That depends on who is doing the talking.

According to the FCC, who as part of its 2015 Broadband Progress Report, voted to change the definition of broadband by raising the minimum download speeds needed from 4Mbps to 25Mbps, and the minimum upload speed from 1Mbps to 3Mbps.  This decision, at the time,  effectively tripled the number of US households without broadband access.

That wasn’t acceptable to anyone, including the FCC, so they further dictated/ruled that rather than the 25 MBPS download standard being applied the new broadband would be 10 MBPS download and 3 MBPS upload.  So, this is the current standard.
Internet speeds have gone from just 56 Kbps to a potential 500 Mbps over the past 20 years and it likely will not stop there. As companies begin to explore the potential of 1 Gigabit per second Internet speeds, people’s expectations of what is considered fast Internet will likely shift again.
Currently the FCC is considering upping the lower limit for what is considered broadband Internet which indicates perceptions are already changing about high-speed Internet and what is truly fast and what is normal.
Until a few years ago, cable was considered the fastest Internet. The greatest problem with cable is speeds are inconsistent.  The reason for this inconsistency is only so much data can be fed through the cable and if upline users are tapping the data hard, the people downstream are getting less available data.
Current Broadband status in the County
The entire population of Kewaunee County is 20,500 people.  The cities of Algoma, Kewaunee and Luxemburg, already have cable access with broadband internet, so one can assume about 8,500 people in those cities are covered.  That would leave 12,000 people (4,285 households 2.8 people per household) who conceivably would not have access to broadband.

According to various sources, about 15% of the population do not use the internet and don’t want it.  That would take out 642 households and reduce the total without broadband to 3,643 homes.

Those 3,643 homes do have access to various internet providers to include:  AT&T, Cellcom, Verizon, Mercury, Bertrand, Viasat, Hughsnet, etc., etc.

There are various requirements for the differing internet users in the County.  The following table outlines those user types and the type of broadband they would require.
Categories of internet users in Kewaunee County today include:
It has been reported that local companies cannot market their products on the internet. Specifically, Cold Country Wines not being able to sell their product(s) online from this County today is absolutely incorrect.  Just go to their site, they are already selling wines online  http://coldcountrywines.com/
So, how are current Internet users in Kewaunee County today being serviced?

I have spent several hours researching the various providers and phoned many of them to understand their plans and services and to determine the number of customers they already service here.  Obviously, they wouldn’t share their exact numbers as that is proprietary information, but based on the information I received, it would be safe to assume that 2,500 of the 3,643 countryside homes have broadband already. In reality, we are dealing with probably 1,100 homes that are struggling to find the right service for themselves.
Following is a table that displays various providers in the area that already provide broadband service in the countryside area.  These are the people we need to concern ourselves with.

What is the difference in delivery?  I am only going to deal with those folks that live in the countryside.  They have three options, those options reflected in the following table.

In my research, I found the POP providers are ready, willing, and able to provide POP service to the customers in Kewaunee County with their own towers, silos, and repeater towers with no investment from the County.
The POP providers problem isn’t one of being capable or able to provide service, it is defining who needs service. Demand is actionable by these companies, if demand can be determined.
So what the Finance Committee should do is pass a motion that would authorize the Administrator to use whatever internal department resources required to complete a comprehensive survey by mail to those 3,643 rural, countryside homes to determine what types of service these homes already have, which homes do not have broadband internet service.  This probably would max out at a cost of $4,000 which I am sure can be found in existing budgets of the Administrator or Tourism.
Once the data is collected and mapped out, that information could be provided to the internet providers, to include Satellite, Cellphone and POP.
Let the private sector then fill any voids and permanently take this issue off the table for the County.

Your County Board Supervisors per diem and expense report for the period May through September 2018.  Note, in most cases, the expenses and per diems are in direct correlation to the number of committees the board member is involved with.


Per Diem and Expense Report of your County Supervisors 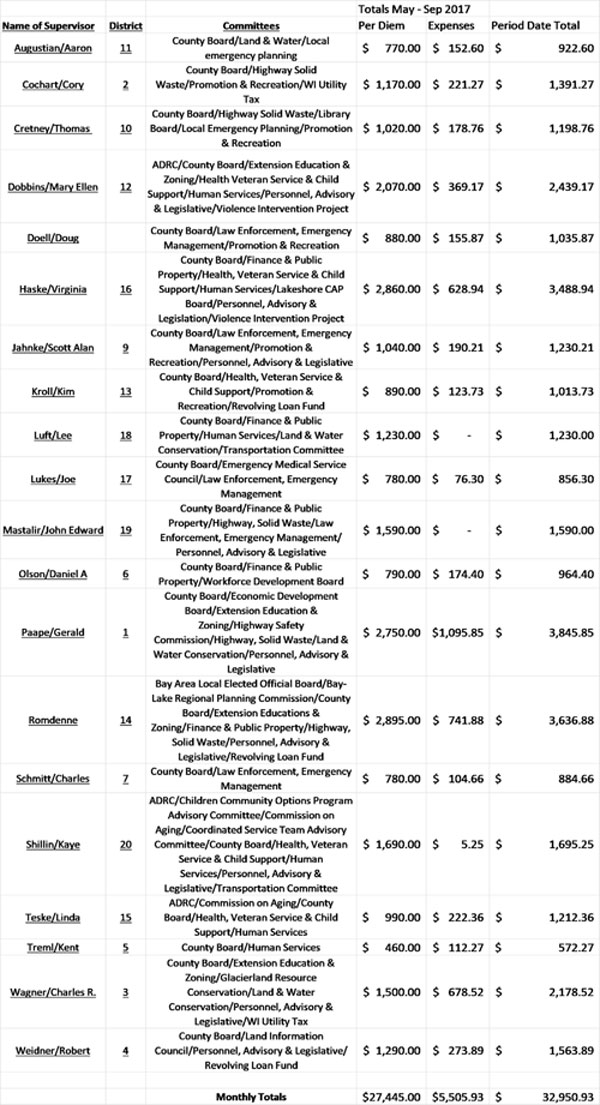