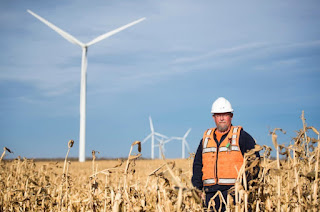 Capital Power purchased Element Power's contracts for wind development some time ago.  Those contracts with individual land owners reaching from HWY 29 and County TRK B down to Two Rivers Wisconsin.  Capital Power out of Edmunton Canada had named this project "Tisch Mills".

This morning I spoke to Matt Martin, Capital Power Tisch Mills project manager and he gave me an update on this project.  The first, and most important update point from the perspective of Kewaunee County residents is that on March 14th, 2018, Capital Power released all land leases for development in Kewaunee County.

The reason for this is primarily due to the changes in capacity of the current wind generators.  The Tisch Mills project is planned for 100 MW, and with 4 MW generators now employable by Capital, they need fewer generators, 25-30 total to produce the 100 MW.  Also, with these larger generators, the developer can strategically place these generators further from homes eliminating some of the controversy around the noise, shadow flicker, etc.

At this time, Capital Power will continue to hold those land contracts in Manitowoc County from the Kewaunee County line, South to Two Rivers area.  Capital Power has this project in a holding pattern while they continue to study the environmental impact on birds and bats.
Posted by Ron Heuer at 6:47 AM